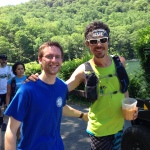 Last week, I had the honor of running 3 miles with a running celebrity.  Here’s a rundown of how I got to run with Scott Jurek on the Appalachian Trail (A.T.), who Scott Jurek is and what he is doing on the A.T., and how I got myself in the background of some local news coverage.

Who is Scott Jurek?  In the world of ultrarunning, he is a superstar.  He has the US record for longest distance run in 24 hours (165.7 miles…or 6.5 marathons in one day at an average pace of 8:42 per mile), has won the prestigious 100-mile Western States Endurance Run 7 years in a row, and has won several other major events including the Badwater Ultramarathon (135 miles starting in Death Valley in mid-July, with 120 degree temperatures…).  In combination with his running, he is also a major advocate for plant-based diets (vegan since 1999), and he co-wrote a bestseller Eat & Run in 2012.

Why is he on the Appalachian Trail?  At the end of May, Scott began a 2,190-mile journey from Georgia to Maine in which he hopes to set the speed record for fastest completion of the entire A.T.  Calling it his ‘masterpiece’ before retirement, his original plan was to beat the existing record of 46 days, 11 hours by up to 4 days, shooting for a July 7th finish in a record 42 days.  By June 24th, he had already gone through New Jersey and was in Harriman & Bear Mountain State Parks in New York.  He had completed nearly 50 miles the day before.

So that is how it happened that, around noon last Wednesday, I joined fellow NY-NJ Trail Conference crazy runners Josh and Melissa in a game of “Let’s see if we can find Scott, get a photo-op with him on the A.T. (where our trail builders are actively building the trail, in the area that the very first section of the A.T. was established in 1923), and run with him for as long as we can”.  Up at the summit of Bear Mountain, we first realized it wouldn’t be a simple “Hey, how’s it goin’?” encounter when we spotted a bunch of local reporters with news cameras…and when we found Scott, he was surrounded by more than a dozen runners.  But something seemed a little unusual, because he was wearing a bright yellow “guide” vest, had a dog running with someone in front of him, and someone else was right next to him holding his arm. 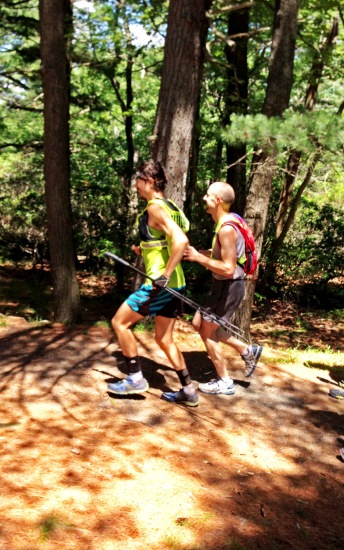 In the whoosh of Scott and everyone running by, and us joining the pack, it took us a few seconds to realize that Scott was guiding a blind runner up the A.T. on Bear Mountain.  Most people attempting a speed record probably wouldn’t purposely do things to slow themselves down, but Scott decided to run a section of difficult terrain with his blind friend as a way to raise awareness for his friend’s guide dog non-profit.  So we received an awesome inspirational boost right off the bat as we ran with everyone 1/4 mile up to the summit.  There, Scott took a quick breather as the reporters talked with Scott and his friend, Tom; they first ran together in the Boston Marathon this past April, where Scott guided Tom to a 3:42 finish (read more about Tom here:  News12 Hudson Valley story, LoHud.com story, Observer.com story).  We listened in and had fun taking some photos, like the one below of Melissa and Josh in front of the in-progress interview. 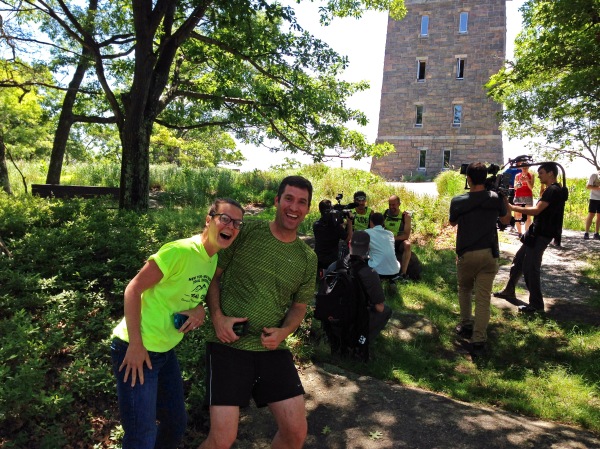 The interview finished up, Scott said goodbye to Tom, and we joined in with the entourage of runners that had grown to about 15.  We passed Perkins Tower, spotted the Manhattan skyline, and then started our descent of Bear Mountain.  I’ve been on this section of trail many times before, as the Trail Conference has been building new trail here for more than 10 years.  It includes a stretch of incredible rockwork, including more than 800 handhewn granite steps (put in place with help from more than 700 volunteers), and it was pretty cool being led by Scott down this trail. 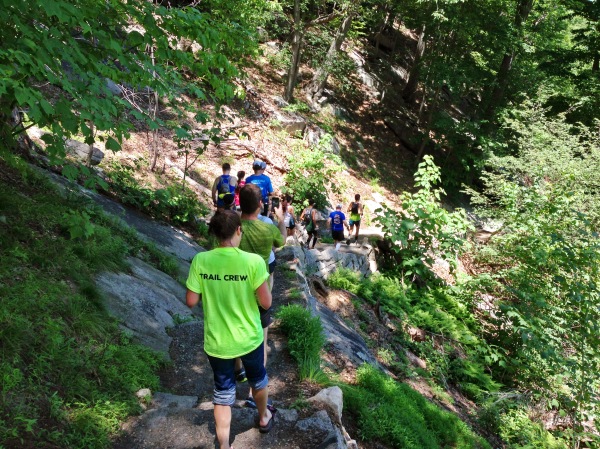 A quick shout out to Melissa (bright ‘Trail Crew’ shirt above), who didn’t have her running shoes, but couldn’t pass up the chance to run with Scott and so ran nearly 3 miles in athletic sandals!

We all wound our way down the mountain in mostly-single-file, and then took maybe a 10-minute break while Scott refueled.  At this point, some runners in our group decided to stop, a few more runners joined in, and we decided to follow along a little further.  Scott finished his fueling, and then was nice enough to accommodate any photo requests while we started walking.  The three of us tag-teamed with the camera, and so we got the photo up top of me and Scott at Hessian Lake.  Aside from this photo time, it seemed like most were trying to respect Scott’s space.  The group of 20 now ran through the Bear Mountain Zoo (Scott took a quick stop to watch two big bears playing) to get to the Bear Mountain Bridge.  Scott led the group across the Hudson River, where he hoped to cover another 30 miles for the day, but we decided to make that our stopping point and watched as the group started across the bridge. 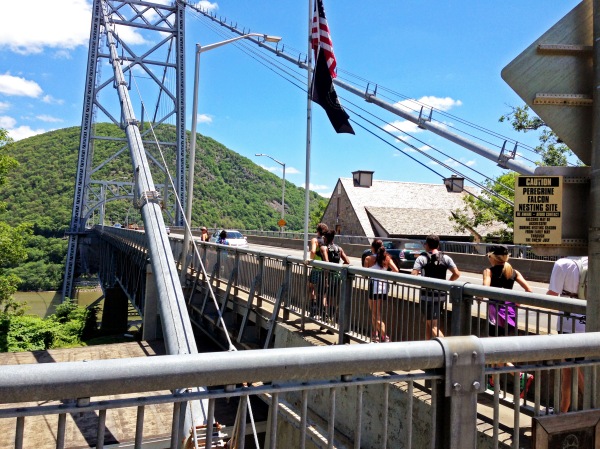 We ended up running with Scott for about 3 miles, and it was an honor being able to join him on 0.14% of his incredible Appalachian Trail journey.  And lucky for us, our cars were back where we started…3 miles away and more than 1,000 feet of climbing…which meant we had a bit more time to reflect back on Scott’s inspiration!  A fun 6 miles for the day, up and down Bear Mountain, with an ultrarunning celebrity, two cool co-workers (thanks Josh for putting this “Let’s see what happens!” plan together), and a bunch of other great runners sharing in the adventure.

Later that day, we discovered some of the news articles, and found video that they had shot up at the summit of Bear Mountain.  Check out the short video on News12 Hudson Valley’s website.  My royal blue Trail Conference shirt and pale white legs make a few appearances, including the shot below of Josh, myself, and Melissa behind Scott and his wife Jenny (who is serving as his main support crew!).

Scott is currently in Vermont as of Tuesday morning (June 30), with just less than 500 miles to go; you can follow his progress on his Facebook page at www.facebook.com/ScottJurek.  It’s tough terrain the rest of the way, but here’s hoping he gets to the end in Maine around his goal date to set a new speed record!

I’ll end this fairly long post with a great quote from Scott from his Bear Mountain summit interview that we listened in on:

Reporter Question:  What have been some of the struggles?

Scott Jurek:  Some of the biggest struggles I would say are, each day, trying to get myself to get out and do the same thing over again. I mean, when I finish at night…I mean, two nights ago, I finished at 1am in the morning, and the next morning I’m waking up at 5:30 and hitting the trail again. And that’s the biggest thing, is every day I’m like “Oh man, I just finished 50 miles!”, you know, so jubilant, and then I remember right away that I’m going to have to wake up and do that again. So, as much as I love being out here, it’s a struggle, and life is a struggle, and it’s in times like that that you learn the most.

Sunrise Mountain is a great spot along the Appalachian Trail with views all around.  This is looking southeast over Frankford Township, and even though this particular day was a bit overcast, it was still a lovely autumn scene from atop the mountain.

Mini Cairns in the Catskills

If you have ever been out on some trails and have noticed a stacked pile of rocks, then you have seen a cairn (pronounced like ‘Care’ with an ‘n’ sound at the end).  These piles of rocks are often constructed to help people navigate trails or other paths where other markings are difficult to make, such as over expanses of rock like this area along the Poet’s Ledge Trail in the Catskills.  Of course, there are many rock piles that are just created by people having fun trying to balance rocks!

The 60-foot fire tower on the summit of Overlook Mountain (3,140 feet above sea level) is located at the eastern edge of the Catskills and was active until 1988.  There are fantastic views all around, including the rest of the Catskills to the west (the direction of this photo) and the Hudson River far below to the east.  I enjoyed this snowy jaunt up Overlook Mountain to the fire tower a couple years ago, but it would be neat to see the same views when there is a bit less white and a lot more green. 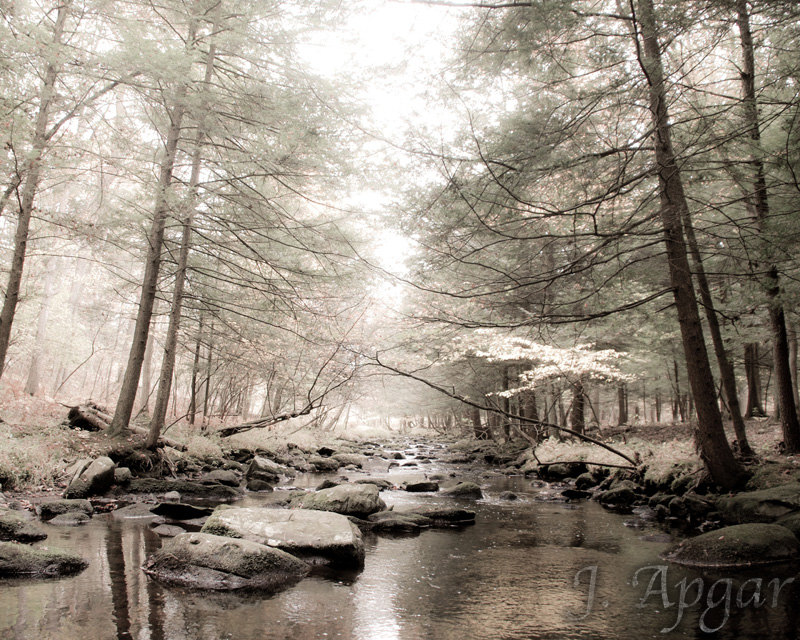 Autumn officially begins here in the northern hemisphere in only a couple days, so I thought I would post this autumn scene to get everyone in the mood.  Taken on a hike in Stokes State Forest in northwestern New Jersey, this photo features the Flat Brook as it passes through a neat stretch of mixed deciduous/coniferous forest and boulders of various sizes.  It was pretty peaceful sitting on a big boulder out in the middle of the brook to capture this shot, and I would definitely suggest making some plans to go on some autumn hikes!

Check out this print on my J. Apgar Photo Etsy shop (www.etsy.com/listing/103294262/babbling-brook-in-autumn-8×10-fine-art), and remember that I’m offering 15% off prints to Daily Photograph followers (just enter code ‘DAILYPHOTO12’ when making a purchase).  Also, be sure to visit my shop’s front page (www.etsy.com/shop/japgarphoto) and check out some of my other available prints!  Thanks for your support!

The northern Catskills in early October can be really colorful.  A hike along the Black Dome Range Trail a few years ago provided plenty of bright yellow, orange, and red foliage to heighten the fall hiking experience.  If you haven’t experienced fall in the Catskill Mountains of New York, definitely try to plan a trip during peak foliage season!

75 Years of the Appalachian Trail

It was 75 years ago this week, in August of 1937, that the 2,180-mile-long Appalachian Trail was first completed (work had begun 14 years earlier, in 1923, by NY-NJ Trail Conference volunteers at Bear Mountain in New York).  If you are on the East Coast and haven’t been on the Appalachian Trail recently, or ever for that matter, I would definitely recommend finding a section near you to explore!  This photo was taken near the 6,643-foot Clingman’s Dome summit in Great Smoky Mountains National Park, which is actually the highest point along the entire trail.